For the second time in three years, Gareth Southgate paid a painful price for his caution as Italy handed England’s manager another dose of penalty heartache in Sunday’s agonising Euro 2020 final defeat.

Southgate’s side had made a dream start to their first major final in 55 years when Luke Shaw fired England ahead inside two minutes at Wembley.

At that point, it was easy to imagine Southgate becoming a sporting immortal with England 88 minutes away from their first major trophy since the 1966 World Cup.

But England went into their shell due to Southgate’s passivity as the match wore on.

Leonardo Bonucci equalised in the second half and Italy held their nerve to win 3-2 on penalties after the tense 1-1 draw.

It was another miserable shoot-out experience for Southgate, who missed the crucial penalty when he was an England player in their Euro 96 semi-final defeat against Germany.

Since taking charge as England manager in 2016, Southgate seemed to have erased his country’s wretched record on penalties as they beat Colombia in the 2018 World Cup last 16 and Switzerland in the 2019 Nations League third place play-off.

But Southgate’s decision to send on Marcus Rashford and Jadon Sancho late in extra time to take penalties against Italy backfired spectacularly as both missed, along with teenager Bukayo Saka.

The raucous mood at Wembley had grown increasingly tense as Italy gradually turned the tide in their favour after England’s electrifying start.

With England unable to find a second goal, they were left vulnerable to Italy’s patient passing and growing confidence.

It was a familiar predicament for Southgate, who had watched on impotently when England blew the lead against Croatia in the 2018 World Cup semi-final.

Back then, Southgate failed to find a solution to the control imposed by Croatia midfielder Luke Modric and England crashed out with a whimper.

Three years on, he said this week that he felt England were “better prepared” for high-stakes matches after the painful end to their World Cup run in Russia.

That seemed plausible when England recovered from conceding their first goal of the tournament to beat Denmark 2-1 in the Euro semi-finals on Wednesday.

But four days later, England reverted to type, with the nerves and fear of 55 years without a major trophy appearing to paralyse them as Italy pressed for an equaliser.

“They just sat back a little bit in the last five or 10 minutes of that first half. Remember Croatia in 2018? They sat back and got pushed back,” former England defender Gary Neville said as the hosts faded.

While Italy boss Roberto Mancini forced the momentum in his side’s favour by sending on Bryan Cristante and Domenico Berardi, Southgate kept his powder dry until it was too late.

It proved a fatal mistake as Bonucci poked in Italy’s 67th-minute equaliser after Marco Verratti’s header was pushed out by Jordan Pickford.

Southgate could have no complaints as Italy were well on top by that point.

Only after Bonucci stood triumphantly on top of an advertising board to celebrate did Southgate react.

But, just like their agonising loss to Croatia at the World Cup, England had run out of steam.

But, as Mario Mandzukic was the executioner with Croatia’s winner in Moscow, so it was Italy goalkeeper Gianluigi Donnarumma who plunged in the dagger this time with his shoot-out saves.

As Southgate consoled his devastated players, England was left with only tears for souvenirs as the nation faced up to a Monday morning hangover for the ages. 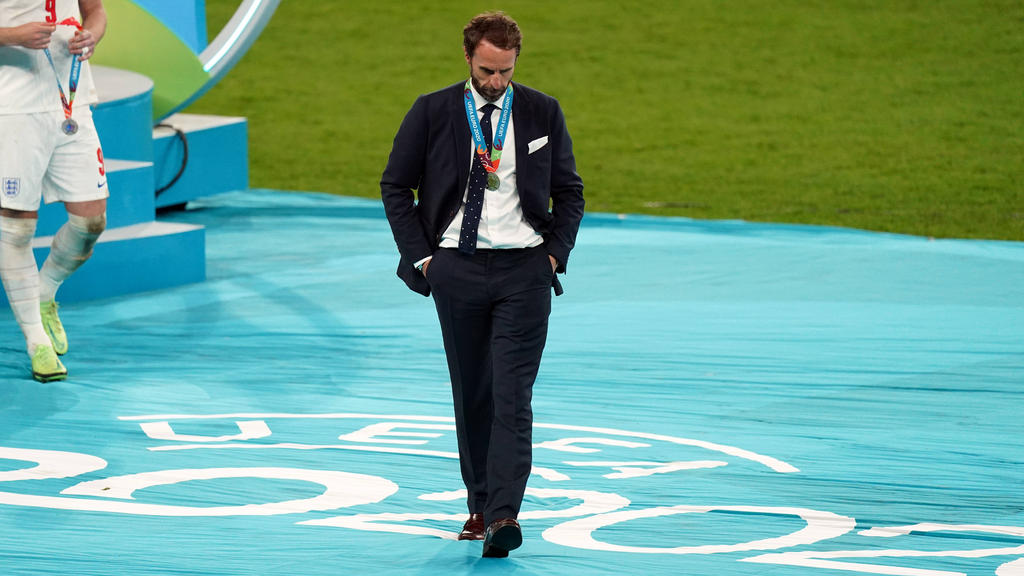