Despite the fact that not all teams have qualified, UEFA have drawn the quarter- and semifinals of the Champions League. In four of the eight quarterfinal games one of the teams still has to be determined in the return legs of the round of 16 games that were interrupted by the coronavirus pandemic in March. Those games will now take place on August 7 and 8.

Overview All Champions League round of 16 games at a glance

The draw has thrown up several interesting fixtures. German champions Bayern Munich, who are up 3-0 against Chelsea, will face either Barcelona or Napoli (first leg 1-1). RB Leipzig will face Atlético Madrid, who have eliminated title holders Liverpool.

“Everything is possible in one game,” Leipzig sporting director Markus Krösche said to German television station Sky on Friday. “We can’t change the draw, Atlético know this tournament well and have an experienced coach, but we are excited for the game and the difficult opponent.” 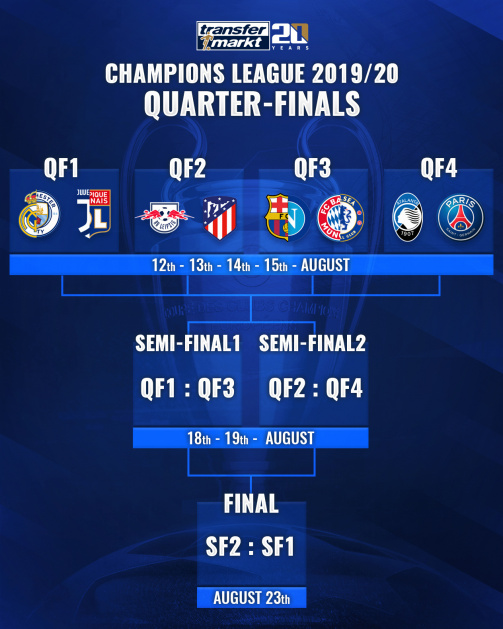 Leipzig are not the only team to face a difficult opponent. Manchester City still have to play their return leg against Real Madrid but won 2-1 on the road. After facing Los Blancos at home at the Etihad, City, should they advance, will face either Juventus or Olympique Lyon. Lyon have won the first leg at home 1-0.

All Quarterfinals of the Champions League at a glance:

All Semifinals of the Champions League at a glance: